Ten years ago, weight reduction and lightest possible equipment was a priority for the infantryman. Now the Armed Forces are returning to the heavier 7.62mm calibre with 1,000 new machine guns acquired during 2022.

Original article in Norwegian posted on https://www.klikk.no/reportasje/dette-er-forsvarets-nye-favoritt-endelig-er-det-noen-som-har-skjont-det-7159943 on 15 June 2022.

Reduced weight or increased target effect? Both, please. Now the wish is coming true for the infantrymen, i.e., the foot soldiers in the Norwegian Armed Forces.

For the generation of conscripts who lugged an MG3 machine gun through the snow, the task of gunner and ammunition carrier was very unpleasant. 1,000 rounds of 7.62 calibre ammunition weigh 30 kilos, besides the weapon itself, which weighs 11.5 kilos. In addition to the backpack with personal equipment.

To solve this problem the MOD introduced the FN MINIMI 5.56 as a support weapon in 2010. Firing the 5.56mm calibre, the same as in the HK416 rifle, the weight of the machine gun was reduced by four kilograms, while the ammunition weight was halved.

This allowed the soldiers to move faster, or carry twice as much ammunition.

But nothing comes for free. The disadvantage of the light calibre is the reduced ability to penetrate protection when the enemy is in prepared positions. In addition, the target effect is reduced at distances over 300 metres.

Capture video: As an infantryman, there are three ways to protect yourself:
Through firepower, armour, or movement. The 5.56 calibre increased firepower and mobility,
but at the same time decreased penetration power. With 7.62mm, it is easier to penetrate barriers,
and the infantry team gets more punch over distances of up to 800 metres, says Staff Sergeant Alexander Ruud.

He is overall project coordinator for the acquisition of the new FN MINIMI 7.62 Mk3 machine gun for the Norwegian Armed Forces.

Caption picture #2: Controllable: With a hydraulic buffer and relatively low weight,
the machine gun can be fired accurately even from the standing position.

Ruud followed the first course for instructors on the new weapon at the shooting range at Terningmoen in Elverum. In 2020, the choice fell on the Belgian manufacturer FN Herstal, who also delivered the FN MINIMI 5.56.

The similarity between the two versions of the machine gun is striking, requiring only a short course for the gunners to adapt. The weight difference is not great either, only a few kilos.

Two years ago, the FN MINIMI 7.62 Mk3 was selected, based on weight, ergonomics, combat endurance, delivery conditions and price. By then, Ruud’s team from the Army Weapons School had fired 30,000 rounds in endurance tests with three different competing weapons.

In addition to the technical tests, they were also exposed to pure torture tests, including by exposing them to salt fog that was equivalent to several years of use on naval vessels.

Caption picture #3: OUR OWN TEST:
Even for a relatively inexperienced shooter,
it is possible to get all shots on target.

The framework agreement that Forsvarsmaterel (MOD purchasing department) has signed with the manufacturer is initially for the delivery of 1,000 machine guns in the third quarter of 2022, with an option for the delivery of a further 3,000 weapons. The contract has a value of up to NOK 350 million.

In the first phase, it is the Army, the Navy and the special forces that will receive the new weapons. If the option is taken up, the Home Guard, which still uses the MG3, will also get new machine guns.

Caption picture #4: LONG RANGE: With an optical sight,
the weapon has an effective range of up to 1,000 metres.

Ruud picks up one of the padded plastic cases that contains the weapon itself, the pouch with an extra barrel, and tools. A clever detail is the built-in wheels that allow one person to pull it behind them like a normal civilian rolling suitcase.

In addition to the carrying handle in the middle of the weapon, it is 20cm shorter than its predecessor. It is also significantly lighter than both the MG3 and the FN MAG, which are the two 7.62mm machine gun types that the Norwegian Armed Forces have used until now. In addition, the stock is adjustable so that the weapon can be ergonomically adapted to the individual shooter.

The assistant gunner, who must help the gunner with observation and loading, and not least carry the majority of the ammunition, has an easier job: the ammunition belts are stored in nylon pouches that re-attach directly to the machine gun.

They can also be clipped directly onto the combat vest and one pouch can be issued to each soldier in the squad to distribute the weight.

Caption picture #5: ROBUST: The image is admittedly from the sales brochure
of the weapon’s manufacturer, but the test carried out by the Norwegian Armed Forces
confirms that the machine gun can withstand water, dirt and cold.

50 meters away are the silhouette targets that the course participants shoot at. Ruud’s colleague, Senior Sergeant Magnus Langseth, generously offers us half an ammunition belt and an introduction to the “beast”.

Langseth quickly goes through the shooting position, sights and cocking handle, while at the same time memories from our own military service return: Back then, the MG 3’s recoil was so hard that the field cap was used as a buffer between the butt and the shoulder. The most creative ones used a pack of sanitary napkins as a cushion.

Surprisingly, the FN MINIMI feels comfortable and controllable, considering the calibre. The reason is that the recoil is reduced by a hydraulic buffer. It lowers the rate of fire to 12 shots per second, but the accuracy is impressive with all shots in the target.

The weapon is so precise even at longer ranges that it is equipped with an optical sight with up to six times magnification. With the heavier 7.62 calibre, it is effective against personnel up to a distance of 1,000 metres.

Caption picture #6: Controllable: With a hydraulic buffer
and relatively low weight, the machine gun can be fired accurately
even from the standing position. Photo: Håkon Bonafede

While the FN MAG and some MG 3s continue as vehicle-mounted machine guns, this “big brother” version of the FN MINIMI 5.56 is to be used by the Norwegian Armed Forces’ special forces, light infantry units and as support for infantry teams in the Army. Previously, each squad was issued with one MG 3 machine gun.

When switching to the light 5.56mm calibre, each platoon was reorganized into three squads with two machine guns each. They were thus able to move faster, while the fourth squad was a fire support team with two FN MAGs.

The machine gun was launched in 2013 as an improved version of the lightweight FN MINIMI 7.62. Low weight, adjustable stock in five steps and hydraulic recoil buffer make the weapon as easy to handle as the 5.56mm variant. Effective range is almost tripled from 300 up to 1000 meters. 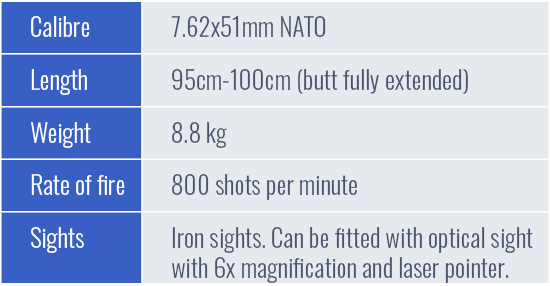 In the new organization, the three manoeuvre squads are kept and the weapons in the fire support section are replaced with the lighter FN MINIMI Mk3 7.62 machine gun as a base of fire for the others.

The MG3 was partially phased out by the Army in 2010 when the weapon in the manoeuvre squads was replaced by the FN MINIMI 5.56 and further in 2014 when the fire support teams received the heavier FN MAG 7.62. As ground role weapon, the latter was unsuitable, according to Ruud. It had the same weight and length as the MG3, but only half the cyclic rate of fire.