Belgium-based FN Herstal, one of the world’s leading designers and manufacturers of small caliber weapons, will showcase newly-developed small caliber ammunition at Defense and Security Equipment International Exhibition in London, UK, from September 10 through to September 13.

5.56x45mm SS109 ammunition was originally designed by FN Herstal and adopted by NATO as the second official caliber in 1980. FN Herstal has now engineered the new FN PERMAX™ Enhanced Performance Round (EPR) 5.56x45mm cartridge so as to deliver superior performance in urban combat by passing through barriers such as windscreens, automobile bodywork, glazing or masonry to reach a protected target.

Composed of a hardened steel penetrator and a brass body, the FN® PERMAX 5.56 has been developed to meet and anticipate further environmental European and international legislations requiring use of lead-free ammunition.

Both FN PERMAX™ 5.56 and FN PROPASS™ 5.56 cartridges are compliant with NATO standards – therefore, compatible with all weapons chambered in 5.56x45mm NATO. These two newly-developed cartridges are qualified on FN Herstal weapons such as carbines and assault rifles (FN SCAR®-SC or FN SCAR®-L), and light machine guns (FN MINIMI® 5.56).

In the .50 cal ammunition line, FN Herstal has designed a reduced range cartridge that features a shorter travel distance limited to 3,500m.

Highly reliable without requiring re-zeroing or converted weapons, the FN ARIA™ .50 RR cartridge is dedicated to safe and effective training with .50 cal weapons on shooting ranges that are limited to the use of 7.62mm weapons. With a tracer version also available, the FN ARIA™ cartridge can be provided on belts (4 FN ARIA™ .50 RR + 1 FN ARIA™-T .50 RR-T) for realistic training. 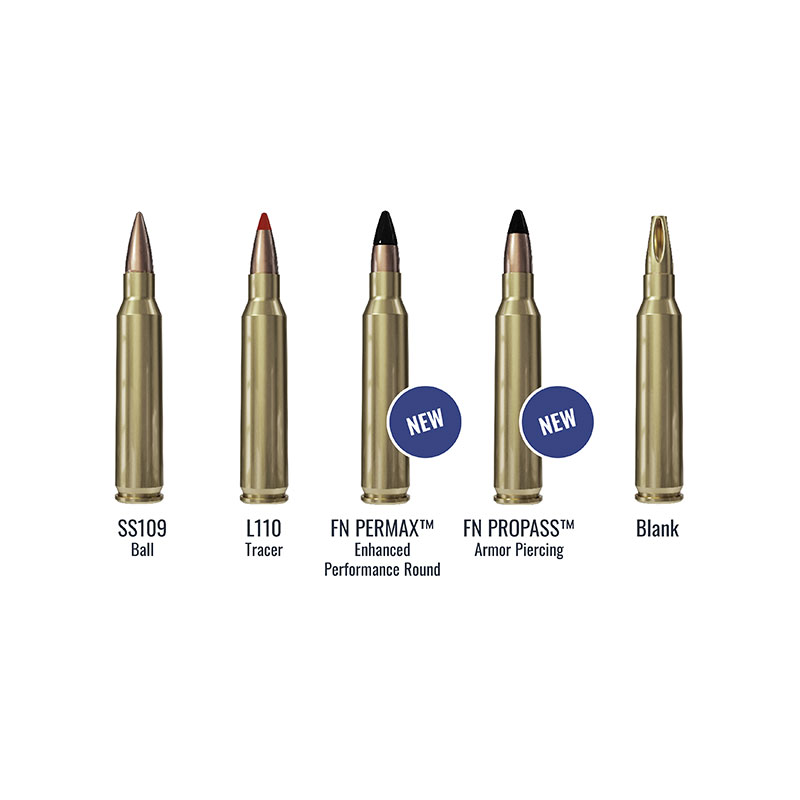